“This lack of tolerance is simply unacceptable,” said Simon Quinsworth, chief spokesman for the National Leather Crafting Guild, “you find some of the animals with lower levels of intelligence making some of the most critical and intolerant remarks.”

Negative ratings from cows have steadily diminished over the last decade, which has been largely attributed to the “Got Milk?” campaign, which cows used as a rallying point for recent bovine activism.

Most surprising was the reaction by Elk, a traditionally quiet and reserved species.

“We can only speculate, of course,” researchers said, “but we suspect the increase in the use of Elk hide for floggers may account for the recent change in attitude.” 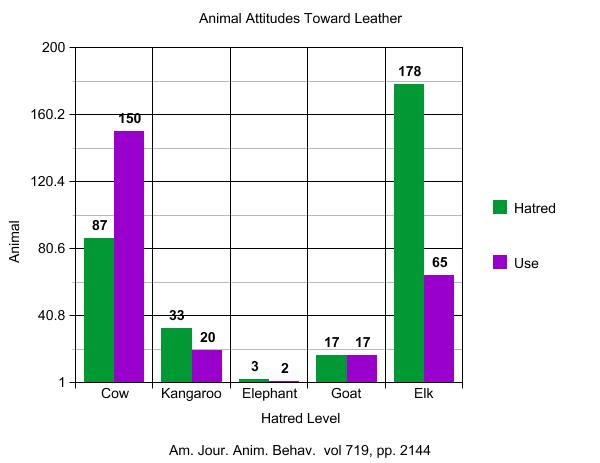 “This kind of research is really difficult,” Peter Peterson, one of the principal researchers, says, “because animals can’t talk.  So we rely on a lot of guessing to determine what they are thinking.”

Protestors from PETA and the Humane Society have been picketing the University since Sunday.  “We have no right to know what animals are thinking,” said one protestor, “they are just animals.”