Hi Emily here with a review of last summer’s blockbuster, The Avengers.  It should be no surprise to anyone that my favorite character in the film is Loki.  Why?  Because he is all about betrayal.  Betrayal and causing pain and suffering to others.  Just the kind of stuff that turns me on.  Plus he is a god, which is cool.

All the other so-called superheroes assemble to try to stop him and I guess I knew from the beginning they would win because the whole franchise is kind of riding on it, but I was still rooting for Loki.

It was bittersweet in the end, because as much as I love Loki, having him defeated and imprisoned makes him completely inaccessible, which would just be so delicious and yummy.

Of course none of it is real.  What is real is the 8 x 10 photo Tom Hiddleston (the guy who plays Loki). 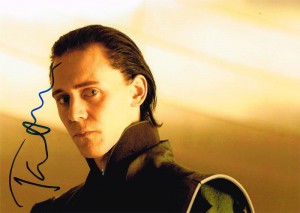 Unfortunately, real also is the restraining order issued by Judge Calvin Reardon, maintaining that I have no further contact with Mr. Hiddleston after sending him several tokens of my affection.

All the court orders in the world can’t stop me from loving you Loki!  Stay strong.  Some day I just know we’ll be together.

About Emily: Emily is The Daily Flogger’s emotionally masochistic film and media critic.  Her views are exclusively her own and should not be considered the product of a rational mind.  Her reviews usually have little to do with the movie in question but do give a nice glimpse inside the mind of a twisted and tortured soul.